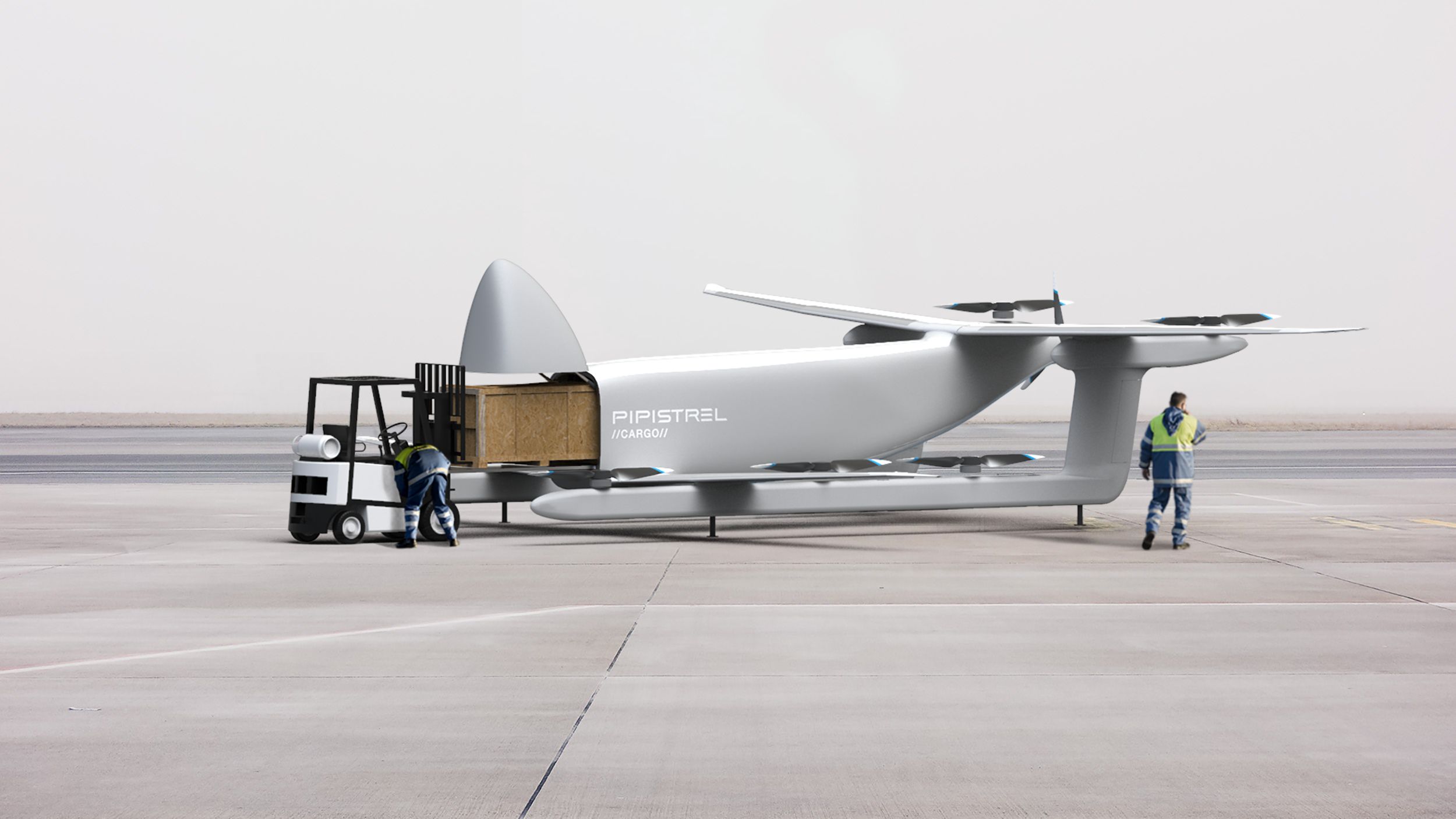 Pipistrel, the innovative Slovenian company that has been producing electric trainers for several years, now says it’s ready to take orders for a hybrid-electric eVTOL cargo carrier capable of delivering up to 1000 pounds (460 kg) over an unspecified distance. But the Nuuva V300, says the company, will be able to fly a 50-kg load (110 pounds) to a distance of more than 1500 miles. A smaller variant, the V20, is designed to carry payloads up to 20 kg (44 pounds) over shorter distances.

The V300 has a unique planform that houses four independent vertical-thrust electric motors on twin booms with an internal combustion engine offering horizontal thrust in a pusher configuration. The aircraft has two high-aspect-ratio wings, one low-mounted forward and a high-mounted wing in the rear. It has no vertical fin or rudder. A center section between the two booms provides the cargo hold and it’s accessible via a hinged nose door.

This is not a small vehicle, according to Pipistrel’s specs. It can accommodate three so-called EPAL standard pallets that measure up to 47 by 31 inches (1200 by 800 mm). These can be loaded onto the V300 via forklift. The V300 would be capable of vertical takeoffs and landings and would transition to level flight, relying on the wings for lift. The typical mission would be flown autonomously with an onboard redundant flight control system that can be continuously monitored by a ground operator.

When AVweb visited Pipistrel last year, the company said it was bullish on autonomous cargo delivery with electric vehicles and the V300 appears to have evolved, at least broadly, from the company’s work on its 801 eVTOL urban mobility aircraft unveiled at the Uber Elevate Summit in Washington, D.C., last year. The company hasn’t said how far along in development that vehicle is, but confirmed that it’s flying prototypes of various sizes.

The V300’s electric engines are Pipistrel’s own E-811 models, which it says are already certified. The company doesn’t identify the hydrocarbon pusher engine other than to say it’s “a dependable and proven cruise engine.” Thus far, Pipistrel has favored Rotax engines in both its production airplanes and hybrid-electric prototypes. The E-811 engines are liquid cooled, as is the planned battery system in the V300. Effective cooling, the company has said, extends battery life and improves performance at the expense of a small weight addition.

Pipistrel says the V300 combines the strengths of both airplanes and helicopters and will have a fraction the operating cost of rotary wing vehicles. No prices have been given, but the company is planning for the V300 to enter service during the second half of 2023.