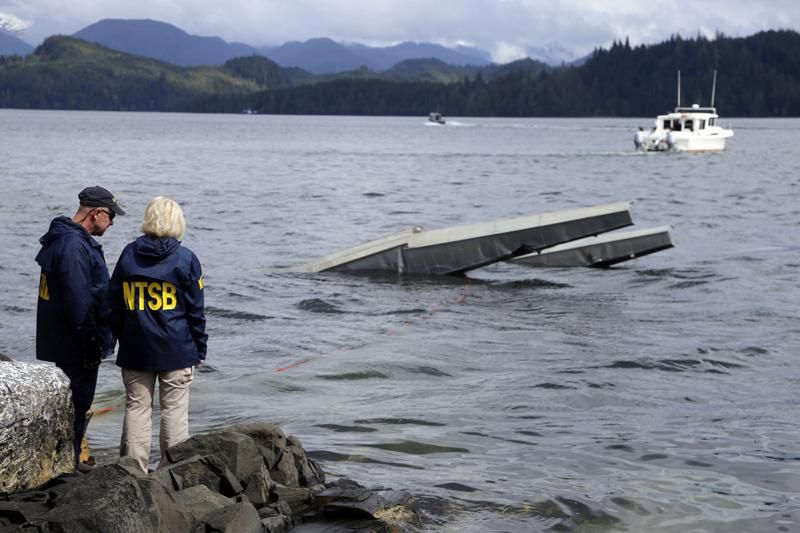 The NTSB unanimously agreed on the probable causes of a May 2019 midair collision in Alaska that killed six and injured 10. The board cited obstructed views due to aircraft structure and passengers and the lack of an aural traffic alerts in crowded airspace.

The pilot and four passengers in a de Havilland Beaver floatplane operated by Mountain Air Service died, as well as one passenger in a de Havilland Otter operated by Taquan Air, when they collided at 3,350 feet. The rest of the passengers in the Otter survived along with the pilot. All the passengers on both aircraft were from the same cruise ship and were on noontime sightseeing flights to Misty Fjords National Monument near Ketchikan, where the aircraft were based.

According to the board Vice Chairman Bruce Landsberg, “see and avoid” was not sufficient in the high-traffic sightseeing area where the floatplanes were operating. Board Chairman Robert Sumwalt cited “preoccupation with matters unrelated to [flight] duties such as attempting to provide passengers with a scenic view and physiological limits on the human vision, reducing the time opportunity to see-and-avoid other aircraft.”

The NTSB also noted the Beaver pilot would have had his view obstructed just before the collision by the airplane’s structure as well as the passenger to his right. In addition, a window post would have impeded the Otter pilot from spotting the Beaver in time, according to the board’s findings. The board’s human performance specialist noted that the Otter pilot last recalled looking at his in-cockpit traffic display “about four minutes before the collision.”

The probable-cause finding from the board also cited the lack of an FAA requirement for aural and visual traffic alerts on airplanes carrying passengers.

Most Of Us Know How To Stay Alive In An Airplane: Until We Don’t

AVWeb Insider Paul Bertorelli - January 16, 2022
The accident rate and body count is basically in stasis, ticking up and down. For me personally, 2021 was the worst year ever for losing friends and colleagues.
Read more

Paul Bertorelli - January 16, 2022
The Cirrus line of aircraft have been flying for 20 years and although most people in aviation know they have full aircraft...
© 2020 Aviation Publishing Group. All rights reserved.