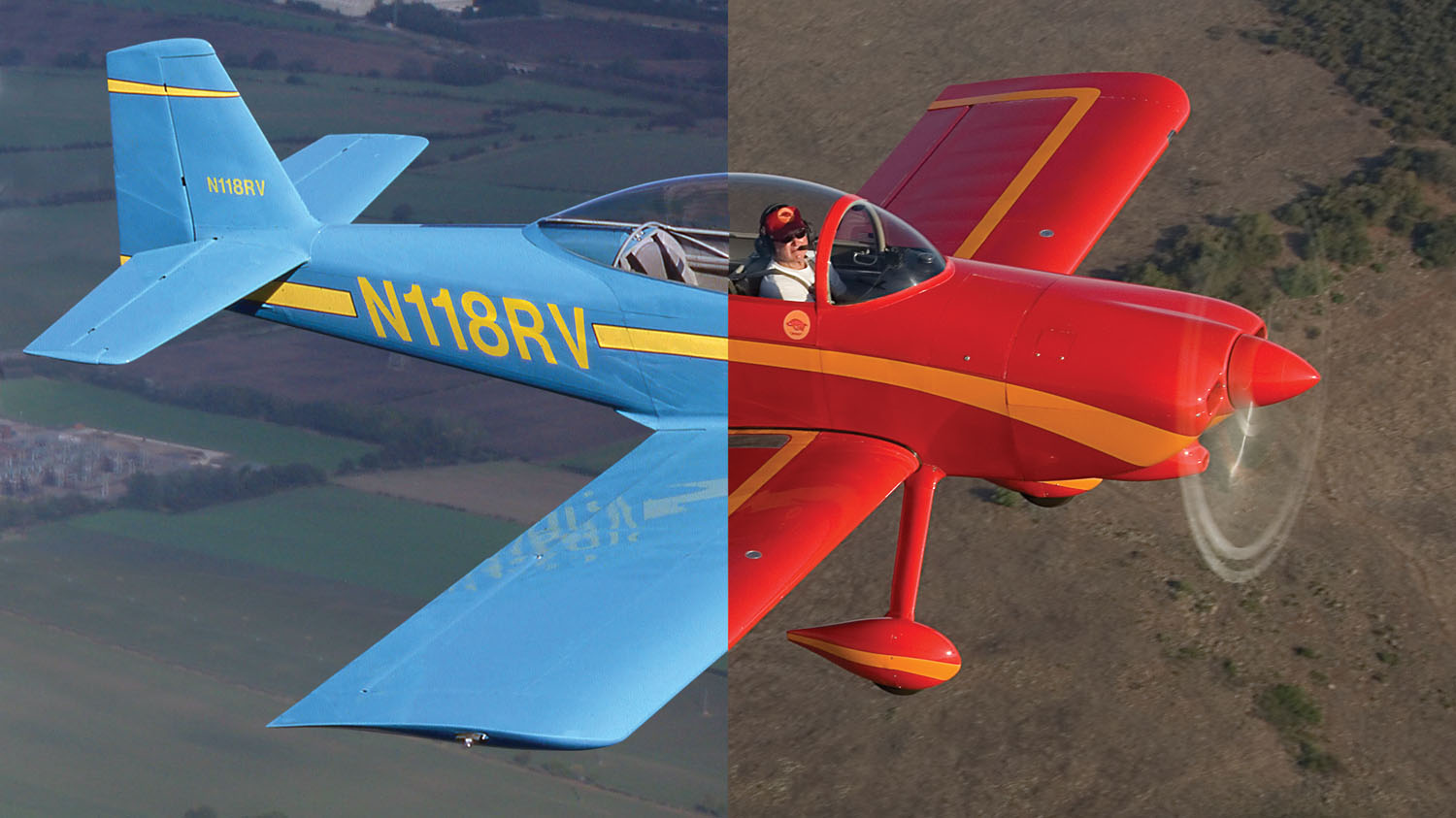 Throughout the 1980s, tandem two-seat homebuilt designs were firmly in the mainstream. Burt Rutan’s VariEze and Long-EZ were popular, and examples of Dick VanGrunsven’s RV-4 were showing up at Oshkosh in rapidly increasing numbers. Then came the RV-6, a side-by-side airplane that was destined to become the most successful kit airplane of all time. Everything changed.

Well, not quite everything…

Even though his RV-6 was outselling the RV-4 by such a wide margin that some senior staffers at Van’s Aircraft were advocating dropping the tandem airplane altogether, VanGrunsven wasn’t ready to abandon the idea quite yet. He’d already considered the question a few years before, when he chose tandem seating for his first two-seat design.

“The RV-4 was something of a compromise,” he says. “It offered great performance and excellent aerobatic handling qualities. It had reasonable cross-country ability, but it was really intended as a sport airplane, which to me meant sitting on the centerline, especially for aerobatics. However, as the success of the RV-6 showed, the homebuilt movement was evolving from building planes strictly for fun flying to those optimized for long-distance travel. The limited cabin ‘ambience’ and modest baggage allowance of the RV-4 became a sales drawback.”

Despite the “drawbacks,” Van felt that there were plenty of pilots who would enjoy sitting on the centerline if these issues could be addressed. This feeling was supported by the appeal of a couple of other airplanes that were finding their way into the public eye. One was the Harmon Rocket II, a hot rod that used a modified RV-4 wing and tail and a wider fuselage wrapped around a 260-hp Lycoming O-540, and the Omega II, a new design being widely promoted at the time. It was a 200-hp retractable tri-gear with a very roomy tandem cabin and a large canopy offering a good field of view. While neither airplane eventually evolved into fully developed kits, the interest they generated was an indicator of a possible market segment.

VanGrunsven made the decision to design a completely new tandem airplane. The new design—to be called RV-8 because RV-7 was already reserved for an eventual successor to the RV-6—differed from the RV-4 mainly in the forward fuselage area. Instead of cowl cheeks surrounding the cylinders, a full-width cowl and firewall sat far enough ahead of the pilot’s seat that firewall footwells were unnecessary. This allowed a much wider fuselage for the front seater, but it did mean that the Wittman-style swept gear legs used on the RV-4 and RV-6 wouldn’t work, so Van opted for steel leaf-spring gear legs mounted in towers built into the forward fuselage.

“No designer is ever happy about increasing complexity and weight, and the leaf gear did both,” he says “but I finally decided that the tradeoffs were worthwhile.” The wide forward fuselage of the RV-8 allowed Van to include what has become one of the RV-8’s signature features—a forward baggage hold fitted between the landing gear towers and the firewall, accessible from the outside. In the RV-4, and most other tandem designs, the only space available for baggage was aft of the rear seat. Not only was capacity limited, the baggage bay was a long way aft of the CG, making the airplane less stable in pitch as baggage was added. And of course, if a passenger was in the rear seat, the CG was already moved aft, so with two people’s luggage—well, you can see the problem for a cross-country airplane. The second baggage compartment of the RV-8 was forward of the CG, giving the pilot the ability to juggle the loading and take advantage of the gross weight available without ending up outside the envelope.

The larger cockpit was covered by a sliding canopy with a fixed windscreen, mounted high on the fuselage so that the pilot could sit tall and see over the nose even while taxiing. Abundant legroom and adjustable-position rudder pedals allowed “wide-body” pilots over 6-foot-6 and passengers almost as tall.

“When I designed the RV-4, I concentrated on the pilot experience,” Van says. “Now I had to think much more about how the person in back—often the pilot’s spouse, who is pretty important when you’re trying to sell someone an airplane—was experiencing the ride. The general consensus is that a side-by-side seating configuration provides more room.

“That doesn’t have to be true. The combined width of the RV-8’s front and rear seats is 58 inches, whereas the width of the perceived-to-be-larger RV-7 is 43 inches. Obviously, there’s more shoulder room in the RV-8. And, while the rear seat occupant does have a limited forward view in a tandem, they do not have a ‘blind side.’ They can see left or right equally well and see down past the trailing edge of the wing, neither of which they can do in the side-by-side.”

There were at least two more advantages to the RV-8 design. The RV-4 and RV-6 were designed around the parallel-valve Lycoming engines, and Van’s was constantly being told that these engines were hard to find while the heavier and more powerful angle-valve engines were littering hangar floors everywhere—and cheap besides. The “adjustable” CG of the emerging RV-8 concept allowed Van to allow for the larger engine and give builders the option of more power without compromising safety. Second, heresy that it might seem, the new fuselage and engine mount design allowed for a relatively simple tricycle gear option.

Van decided to push ahead with his vision. The company prototype shop and engineering staff began work on the new airplane. The proof-of-concept airplane, N118RV, powered by an angle-valve, 200-hp IO-360 Lycoming, flew in July 1995 and made its first appearance at Oshkosh a few weeks later.

The reaction surprised even Van. Prospective buyers mobbed the Van’s Aircraft booth waving bundles of cash. There obviously was an untapped market with pilots who enjoyed sitting in the “captain’s seat” while flying aerobatics and formation. Finally, there was an airplane that didn’t force them to choose between a traveling airplane and a sport machine.

Eventually the RV-8 and its tricycle-gear sibling RV-8A proved just as popular as Van hoped. Kits began shipping in 1996, and when builders opened the box, they got a pleasant surprise—the RV-8 had coincided with Van’s acquisition of new CAD computer programs and computer-controlled machine tools, so the parts were more accurate and consistent. Many parts were prepunched for the rivets that would fasten them together. It was the beginning of a new paradigm in kit aircraft.

Those beginnings were 25 years ago. In that time there have been over 3850 kit starts, and almost 1600 RV-8s and RV-8As have flown. Every week or two, another one flies, somewhere in the world. Who knows how many there will be eventually.

Ken Scott is a longtime employee of Van’s Aircraft and also a multi-airframe builder (RV-6, KK-1, RV-12) whose quest for new skills remains unabated. He lives with his wife, Camilla, on a residential airpark near Canby, Oregon.

This article originally appeared in the August 2020 issue of Kitplanes magazine.