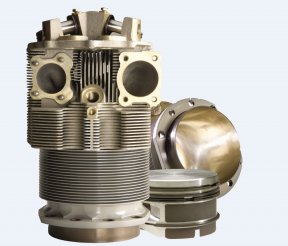 Point is, if you’re going to pull three of the four jugs on an old, Lycoming O-235-C1 engine, then for sanity’s sake, pull the fourth one and send them all to the machine shop. Otherwise, they suffer from separation anxiety. Better yet, just buy new ones and save yourself the angina, even if you won’t save money short-term. Here’s insight from my 42 years of aircraft ownership: Nothing will ever save you money.

The backstory: Two years ago, I bought a Bellanca 7ECA Citabria with a sketchy history. Naturally, I paid slightly way too much for it. “Buy high and sell low,” is my credo, which eliminates post-purchase regrets about whether I wangled a good deal. I rarely do.

Built in Wisconsin in 1974 for a Canadian customer, the Citabria had been crated up and shipped north where it was assembled and certified with all the proper Canadian/Queen Elizabeth stamps and issued an impressive Aircraft Journey Logbook that resembles an old tome found in a county clerk’s archive: “So, you purchased the old Sanderson place, eh … got the plat book ‘round here somewheres. (Shuffle, shuffle, root, root.) Cat likes to sleep on it, ya know …”

The Citabria flew a couple hundred northern hours and crashed a time or two, before being stuffed into hibernation until an employee (now retired) at American Champion Aircraft (ACA) bought it. “Make her like new, fellas,” he’s reported to have challenged his coworkers. And they did. Out went the wood spars and associated ADs, and in came metal, plus new struts, fabric, glass, wiring … the list is ponderous. So complete was the rebuild that ACA issued the airplane, which had never been registered in the U.S., a new airworthiness certificate in 2012.

The low-time engine was “repaired” by a separate shop and reinstalled with a new prop and shiny, red spinner with white spiral striping that is completely mesmerizing when taxiing toward an unsuspecting ramp rat (ICAO: apron attendant). Safety tip from this old ramp rat: Never stare at a spinning propeller. I almost walked into a Mitsubishi’s left prop back in my fueling days. The pilot’s facial expression, a mixture of disbelief and this-is-going-to-leave-a-stain, brought me to my senses, vivisectingly close to the MU-2’s screaming blades.

Shortly after purchasing the Citabria, we pulled the number 1 cylinder, which suffered from low compression and self-esteem. A distant shop repaired it, and I was back in business, teaching tailwheel students how to remove corn stalks from the landing gear while in flight. Not as easy as you might think. Over the next several hundred hours, cylinder number 3 failed a random oil analysis test and showed signs of general lethargy and increased appetite. Cylinders 2 and 4 grew jealous of my attention to number 3, so they, too, conspired to compress less than expected.

“Pull ‘em and ship ‘em!” I ordered the mechanic, who was way ahead of my zero-tolerance bombast. In general, I’m a hindrance in maintenance concerns. Mechanics begrudgingly let me watch but forbid me touching the Snap-On tools. Although, I was issued a Craftsman adjustable wrench (ICAO: spanner), which immediately identifies me as not a real mechanic. If FSDO walks in unexpectedly, sees me and asks, “Where’s the mechanic?” any time of day I’m trained to answer, “At lunch,” and the chance of missing a per diem meal sends the G-men/women fleeing in their G-cars.

Weeks later, I had three “overhauled” (don’t tell your mother I used that word … or air quotes) cylinders painted Lycoming gray and ready to install. The pistons and new rings were snug inside their honed barrels, ready to bring the wheezy Lyc back to something near its mythical 115 HP. Except someone had been a bit gung-ho with the paint, so I spent hours scraping excess from the cylinders where the base nuts grab the case studs. As erotic as that might sound, it’s not. Instead, thick paint could compromise proper torquing. Not to be confused with twerking … which is never proper.

On went the three cylinders, and we pulled the propeller through only to hear what sounded like a dormouse being stretched on a medieval torture rack, “Squeeeeak …” So, out came the borescope, and with the mechanic, mumbling, “Hmmmm,” I watched and helplessly clutched my pearls and wallet.

Before A&P mechanics (ICAO: riggers) can be issued Inspection Authorization, (IA) they undergo serious examination, including demonstrating the ability to mutter, “Hmmmm …” or, “Uh-oh …,” while exploring an aircraft’s innards. Seasoned pilots recognize those soulless mutterings as the portents of fiscal doom.

In my case, the jilted number 1 cylinder had gorged itself on lead—the result of a 100LL disorder—and was beyond our capability to scrape and air-blast clean without EPA kicking in the hangar door. Left with no choice, number 1 was sent to rehab. And, what started as a routine annual inspection ran way longer than planned, but human plans are mere gossamer amid the gales of aviation rationalization, and today the Bellanca is back on her gear legs … legs that—my mechanic noted—had their inner main attach bolts installed with improper washers years ago by persons unknown. The book calls for counter-sunk washers, and when flat washers were substituted, two high-tension bolts, at $45 per, were rendered unairworthy.

Hey, it’s only my money, and, now, finally, for real, maybe, I’m ready to push the airplane outside, except I hear the mechanic stretching on rubber exam gloves while enigmatically gazing at the exhaust pipe. Not sure what the ICAO term is for “This can’t be good ….”

AVWeb Insider Russ Niles - July 13, 2020
Drones can be programmed not to hit each other. Humans? Not so much.
Read more

Paul Dye - July 12, 2020
There comes a day in every airplane build where there is nothing left to do but fill it with fuel, get in...
© 2020 Aviation Publishing Group. All rights reserved.