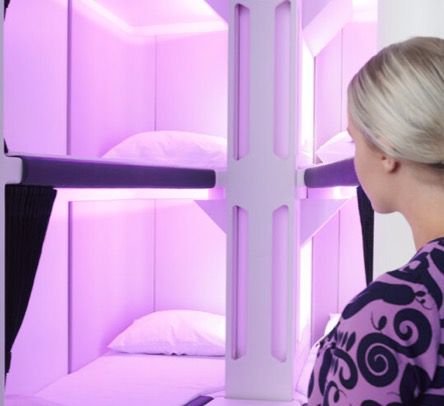 Air New Zealand will be offering its version of hot racking for economy passengers on its ultra-long-haul routes by renting bunks to allow them to unfold. If the authorities approve, one of the airline’s Boeing 787-9s will have six “Skynest” bunks that those sharing their seat rows with eight others will be able to stretch out in for a fee. The airline hasn’t released how it plans to distribute access to the pods, which are 80 inches long and stacked three deep on one side of the plane but runwaygirlnetwork is suggesting a four-rental would be reasonable for the butt-numbing 18-hour nonstops from Auckland to JFK.

The plane will actually have seven different survival options for the trans-Pacific and transcontinental marathon. For the well-heeled, eight “luxe” business class seats with doors and the option for two-person dining will be joined by 42 business premiere seats that don’t have the doors. They will be followed by 52 premium economy and finally 125 economy seats. The starting price for the Auckland-New York service will be about $2250 return.